The Making of Star Wars - Revenge of the Sith Count Dooku was a menacing Sith Lord and central figure in the Clone Wars. Once a Jedi -- trained by Yoda -- he became disillusioned with the Jedi Order and thirsted for greater power. Dooku voluntarily left the light side behind and became Darth Sidious’ dark side disciple, taking the secret name Darth Tyranus and leading the Separatist army. Dooku and others belonged to a House, which was one of the Great Houses of the planet Serenno. The Head of the family bore the title of Count Dooku of Serenno. Dooku is played by the legendary Christopher Lee, who left a mark on a new generation in the early s with the Star Wars prequels and The Lord of the Rings. For the generation before that, Lee was best known for playing Count Dracula in the Hammer Studios' franchise. Dooku, a Force-sensitive human male, was a Jedi Master that fell to the dark side of the Force and became the Dark Lord of the Sith Darth Tyranus during the final years of the Galactic Republic. Count Dooku was a Force-sensitive Human male Jedi Master who fell to the dark side of the Force and became a Dark Lord of the Sith, known as Darth Tyranus. Born into a noble family on the planet Serenno, he was the heir to vast wealth and the noble title of Count. Dooku was taken by the Jedi Order as a child and apprenticed to Thame Cerulian. As a Jedi Knight, he took Qui-Gon Jinn as his first.

Sidious forces Dooku to clean up their trail. Dooku confronts Anakin and Obi-Wan on Oba Diah, revealing his alter-ego Darth Tyranus to the Jedi, and they realize that it was he who created the clone army.

Some further investigation by Yoda prompts Dooku and Sidious to perform a Sith ritual in an unsuccessful attempt to break the Jedi Master; in a vision experienced by Yoda, Dooku fights Anakin, who swiftly defeats and executes him, in a manner very similar to his eventual demise.

Count Dooku does not directly appear in the seventh season. However, as the events of Revenge of the Sith are concurrent with the season's final arc, Ahsoka Tano is informed of his demise at Anakin's hands by Obi-Wan, who tells her that it is important to capture Maul , being the only way the Jedi can discover the true identity of Darth Sidious after Dooku's death.

In the audiobook Dooku: Jedi Lost by Cavan Scott, Dooku meets his sister Jenza, brother Ramil, and father Count Gora, when he visits his homeworld of Serenno as a Jedi Initiate.

During one mission, Dooku sees visions of many different futures through the Force, which shake him to the core. Eventually, Dooku becomes a Jedi Knight, trains two Padawans to knighthood, and joins the Jedi Council, hoping to bring about real change in the Republic.

However, after he saves his homeworld of Serenno from invaders, he decides to remain to help his planet rebuild, leaving the Jedi Order and becoming Count Dooku of Serenno.

The novel also reveals that Dooku had one other apprentice before Qui-Gon, Rael Averross. Dooku appears extensively in the Star Wars Expanded Universe , including novels, comic books and the TV series Star Wars: Clone Wars.

In , Lucasfilm labeled such material non- canon , and rebranded them Star Wars: Legends. In the Star Wars: Republic series, set during the Clone Wars, Dooku trains multiple Dark Jedi apprentices, most of whom he uses as minions.

His apprentices include Ventress, Tol Skorr and renegade Jedi Quinlan Vos. Vos initially intended to infiltrate the Separatists as a spy for the Jedi Council but instead nearly falls to the dark side.

In Jude Watson 's Legacy of the Jedi , Dooku appears in Parts 1, 2, and 4, and is mentioned in Part 3. In Part 1, he is first tempted by the dark side of the Force as a child when his best friend and fellow Padawan Lorian Nod steals an ancient Sith Holocron from the Jedi Archives.

When Nod is caught, Nod lies and says that the theft was Dooku's idea. However, Dooku manages to convince the Jedi Council of the truth, and Nod is then expelled from the Jedi Order.

It is later implied that Dooku himself steals the Holocron because he is intrigued by the Sith's open embrace of power and realizes that he is just as ruthless as they are.

Nod's treachery leaves Dooku with a great bitterness and intolerance of any form of betrayal, as well as an even more pronounced coldness to strangers.

In Part 2, set 13 years later, he is a Jedi Knight, and takes Qui-Gon Jinn as his Padawan apprentice.

By now, he is capable of masking emotions such as anger and hate that the Jedi Code forbids, stating that they in fact make him stronger.

He encounters Nod while defending a Senator from space pirates, and defeats him in combat, almost executing him. However, Qui-Gon convinces him to spare Nod's life, and he and Dooku turn Nod over to the authorities.

In Part 3, set 32 years later, Qui-Gon, now a Jedi Knight, remarks that he has not seen Dooku in years, noting that their relationship was never friendly.

Finally in Part 4, set in the midst of the Clone Wars, Dooku, now a Sith, kills Nod after his former friend refuses to join the Separatists.

In Sean Stewart 's Yoda: Dark Rendezvous , Dooku attempts to trap Yoda by offering to negotiate an end to the Clone Wars. Dooku attempts unsuccessfully to sway Yoda to his cause, while Yoda nearly convinces Dooku to return to the Jedi Order.

When Anakin and Obi-Wan appear unexpectedly, Dooku believes that Yoda was trying to set him up to be captured, and renounces his former master once and for all.

In the novel, it is also revealed that Dooku always resented his parents for "giving him away" to the Jedi Order.

In James Luceno 's Labyrinth of Evil , Dooku engineers Grievous' transformation into a cyborg and trains him in lightsaber combat.

He then schemes with Sidious to invade Coruscant in what he believes to be a plot to kill Obi-Wan and initiate Anakin into the Sith. Matthew Stover 's novelization of Revenge of the Sith expands upon Dooku's character: it portrays him as an evil man who has no concept of loyalty or friendship, and who despises the galaxy's non-human species.

It also explains that Dooku believes that Palpatine's staged kidnapping is part of a plan to kill Obi-Wan and recruit Anakin into the Galactic Empire as the commander of its army, while Dooku and Palpatine will rule the galaxy together.

The novelization depicts Dooku's death scene from his point of view; in his final moments, he realizes that Palpatine used him as a means to engineer the war and as a placeholder for Anakin, whom he intended to be his apprentice all along.

During the animated miniseries Star Wars: Clone Wars , Count Dooku leads the Separatists from behind the scenes, taking the Dark Jedi Asajj Ventress voiced by Grey DeLisle as his apprentice while training General Grievous in lightsaber combat.

In the final episode, he and Grievous kidnap Palpatine, setting the stage for Revenge of the Sith. A number of toys based on Count Dooku have been produced, including the Lego set Lego Star Wars: Duel on Geonosis which recreates the duel between Yoda and Dooku portrayed in Attack of the Clones , [9] and a Hasbro Count Dooku lightsaber.

In the resulting Battle of Coruscant, the clone army of the Republic and Separatist military forces clashed in the stratosphere of the city-planet.

Dooku appeared, engaging both Jedi at the same time. He first defeated Obi-Wan, Force choking him and nearly crushing the Jedi Master with a heavy railing.

An enraged Anakin continued the fight, unleashing a strength Dooku had not anticipated. While Anakin debated what to do, Palpatine encouraged him to destroy Dooku.

Dooku looked to the Chancellor in disbelief, then to Anakin. His expression betrayed a new understanding of what had transpired, but it was a fleeting moment; Anakin decapitated Dooku with one swift motion.

Skip Navigation Disney. Log In. Count Dooku Count Dooku was a menacing Sith Lord and central figure in the Clone Wars. Show More Loading Dooku Reveals the Sith Plot While being held captive by the Geonosians, Obi-Wan learns from Count Dooku that the Republic is currently under the control of a Sith Lord. 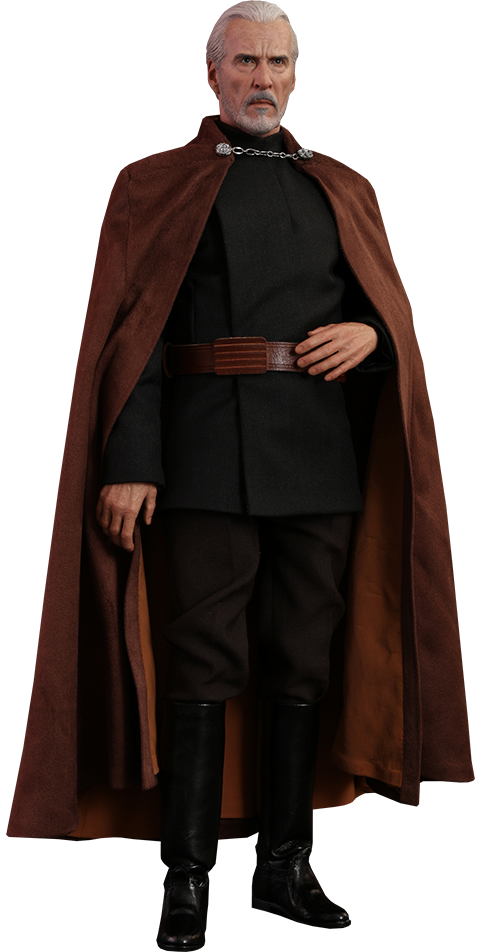 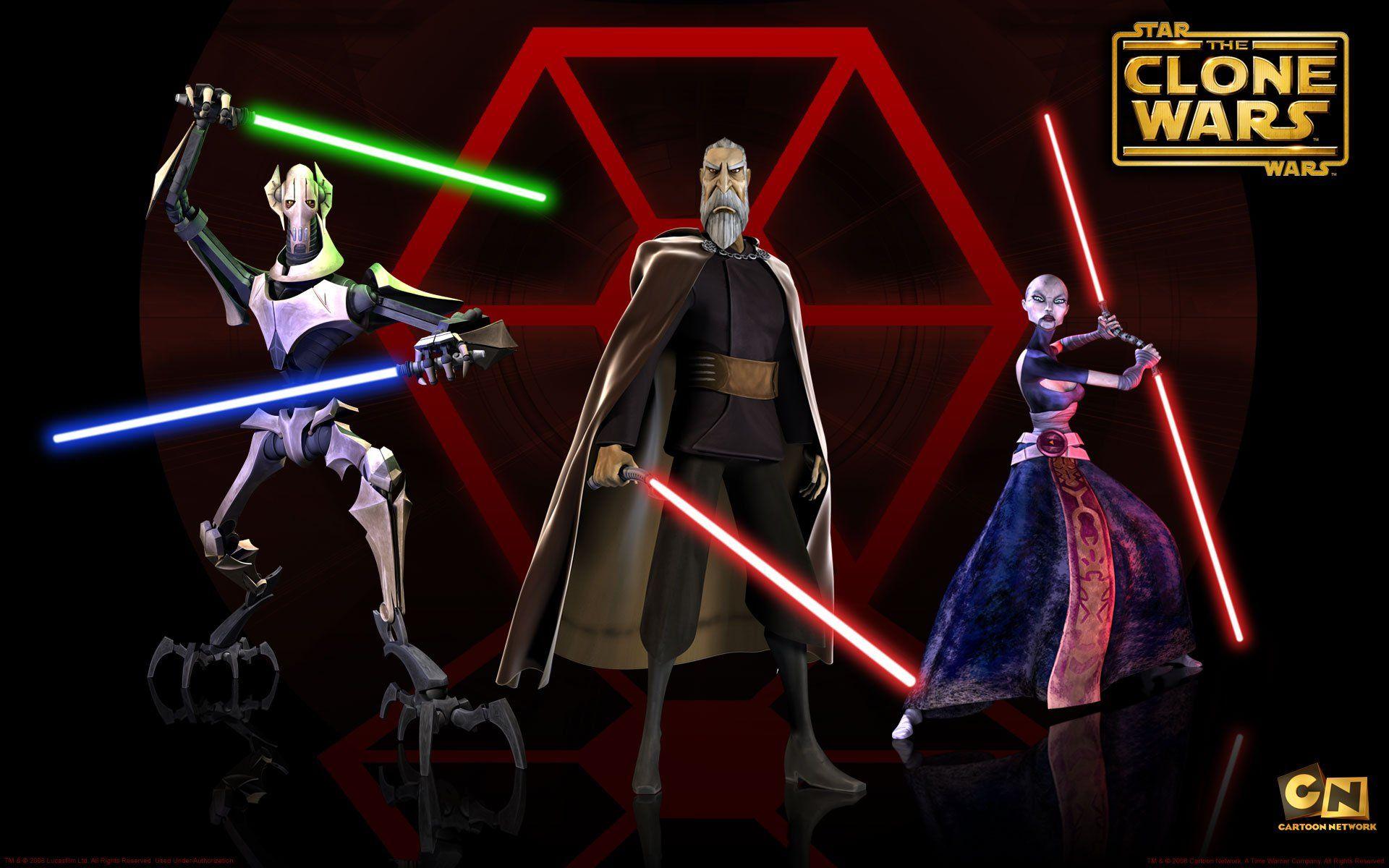